I can seriously say that this is the dumbest thing I have ever done and I’ve done some really dumb things in my lifetime. Mr C wanted to go camping in our van Hannah, reluctantly I agreed. “It will be great” he said “we will have so much fun, it’s going to be a glorious weekend.”

It lashed it down and we spent most of our time sat under this gazebo. Even Eric wasn’t impressed. 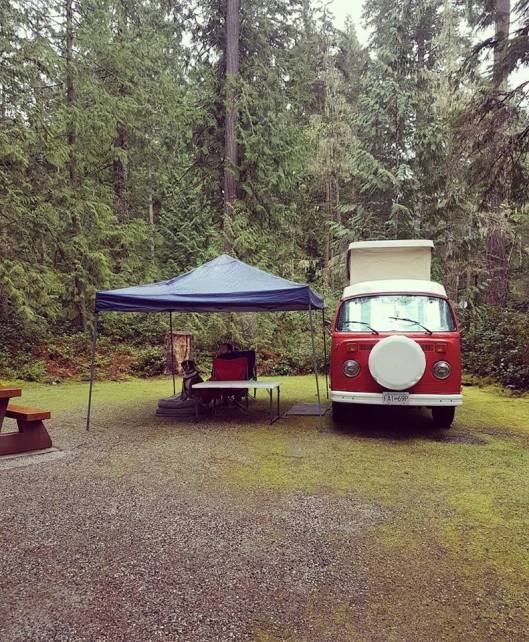 So what else do you do when you’re camping and it’s lashing down with rain. If you’re Canadian,  you’d likely put on a waterproof and go hiking but no, Mr C had done a great job getting me to agree to go camping in the first place, there was absolutely no way I was going hiking in the rain when I had no where to dry off and  chill afterwards. In hindsight, we should have done exactly that though, maybe then, we wouldn’t have been so fuckin dumb……..

We were probably about half way through the box of wine (oh, don’t judge, it was lashing down, what else were we supposed to do) when Mr C first bought up the subject. It was a strategic move, he knows that after a few glasses of wine my inner Beyonce comes out of hibernation stretching her “we can do anything positive bullshit attitude.” The conversation went something like this:

Mr C: “babes we should do a racing the planet event”

Mr C: “A race across the Atacama desert in Chile”

Doesn’t sound bad eh, in fact it sounds pretty awesome. We can go to Chile taste all the good wine and the food, maybe pop to Bolivia. We’ve never been to South America so we would be crossing off another continent (only one more to go after that (smug AF and don’t care)).

Me: “sounds fab babes let’s do it. Can you refill my glass.”

And that was how I managed to get myself signed up for a 250 km multi-day ultra marathon through a fuckin desert. We leave next week with the race starting the following Saturday. Am I prepared? I get asked this all the time and no, I am shitting myself! This really is the dumbest thing I have ever agreed to do. Much dumber than starting a riot in the desert or strategically throwing up after day drinking tripple, tripple Baileys to keep up with the lads (remember that Pale & Interesting, when they wouldn’t let us leave camp until we paid our tab down the pub on adventure training?? Still think they were out of order for increasing the price of our drinks because it was after 5 pm).

Anyways, so yeah we’re are taking part in a Racing the Planet event at the end of September. Here’s a video of stage 1 of the race.

The good thing is, that I am doing this with Mr C, who has made me do lots of dumb things that I never would have done if it wasn’t for him. Such as, scuba diving in the terrifying ocean (my massive fear) becoming a certified Rescue Diver, reaching the summit of Mt. Kilimanjaro (he dragged up the last part after I almost fell apart at the false summit) and snowboarding (well that was actually a fuckin disaster that saw me throw a  full on tantrum on a mountain) but you see where I’m going with this. I know it’s going to mad hard but how boring would it be if we were just going to an all inclusive to chill for a week in Hawaii (I am so booking our vacations next year).

So my lovely friends, as this is going to be mad hard will you please be so kind as to make a donation to one of our chosen charities. We have chosen two charities, one Canadian and one British. The Canadian one is the BC SPCA we wanted to support this charity because they support animals with their tag line being ‘speaking for animals’. As you all know Eric is our boy and we absolutely love him to pieces. Dogs are awesome, they teach us so much and give us their unconditional love and loyalty, yet some cretins treat them so badly, taking them into their homes welcoming them into the family only to discard them when it no longer suits. I have read numerous stories about dogs being found abandoned, waiting in the same place for days for their owners to come back. Fortunately, there are charities out there that give these dogs another chance at the life they deserve, such as the BC SPCA, who welcome any donations in order to keep this work up.

Our British charity is Veterans Aid. They are an amazing charity who assist veterans in crisis, regardless of time served. The reason we chose these guys is because simply, they provide assistance to Veterans who are in crisis with much of their work focused on providing homeless Veterans with shelter.

It’s hard to describe the camaraderie you experience when in the military, for me, I can honestly say that joining the Army saved me from a life that doesn’t bare thinking about. I remember the first day I put on my uniform and stood with my fellow recruits on the parade square. I looked like what we would call a ‘bag of shit,’ my uniform was not ironed very well, my boots did not shine and my feeble attempt of putting my crazy hair into a nice tidy bun under a hair net was pathetic. My Corporal shouted/screamed at me in a Welsh accent that I indeed did look like a “bag of shit” and proceeded to take the piss out of my accent, nicknaming me Shanahana ding dong. Despite all this, as I stood there listening to other recruits being told similar, this feeling went through me. It’s hard to describe but it was physical, it felt safe, like belonging, like I had finally found my home.

The first friend I made shared the same room as me, I think there was 8 bunks but can’t remember. We became friends after she plucked my eyebrows for the first time ever and I accidentally dropped a bottle of her perfume (I was devastated, I’d never had perfume before and saw it as a massive luxury). You’d think we wouldn’t become friends but we became the best of friends, which got me through basic training, the many jail visits and the first half of my military career!

Being in the military was like having a massive family, the years I spent in, saw me form my chosen family of  amazing supportive people. Even those that I am no longer in touch with played a part in who I am today and for that I will be forever grateful. Not everyone who leaves the military have the support needed to transition into a ‘civvy’ and without that support it is so tough. Veterans can find themselves struggling and in need of help, that’s where Veterans Aid comes in. In 2018, Veterans Aid homed 154 people, they need funds in order to continue the work they do.

You will be able to follow us some how on this crazy race, I will post details once I know how that works.

Many thanks for any donations and have a fab weekend.

Hiya, I'm Shelly a British ex-pat who moved to Canada 8 years ago with my hubby landing in delightful Edmonton, Alberta. We moved to Vancouver with our Boxer dog Eric almost 4 years ago and plan on staying here for while.... I love travelling, eating, wine, singing out loud and dancing like a lunatic! View all posts by britishbirdinvancouver